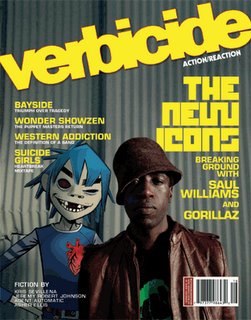 First, big thanks (!) to the people who quickly bought out the first batch of ANGEL DUST APOCALYPSE at Powell's Books (1005 W Burnside Street, Portland, OR 97209). Powell's has since decided to increase their stock and make it part of the featured display for small press, which is very cool. I dropped off a bunch of copies this week.

So, that's good news. Thank you to all the PDX people and others who support their local booksellers.

Next, the new issue (#16) of Verbicide is now out and is ridiculously great. I have to give props to Nate and Jackson for putting out their most attractive, solid issue yet. You've got in-depth interviews with Saul Williams (a major artistic influence on ADA and a hero of mine) and Gorillaz alongside the weirdest "interview" ever with the Wondershowzen guys (it's total chaos but frequently laugh-out-loud and lasts much longer than I'd expected). On top of that you get artist profiles, politics, tons of music reviews, some dreamy Suicide Girls shots, and fiction by people like Agent Automatic and some jackass called... ME!

That's right. The new issue features one of my most popular stories, "The Sharp Dressed Man at the End of the Line"- a cockroach riddled story of paranoia, nuclear war, and creative tailor-work. Which leads me to my "big news" for this blog...

Scheduled to be available by the end May, EXTINCTION JOURNALS is a book-length follow-up to the aforementioned short. I'd give you more details but I don't want to ruin any surprises from the prior short for those that haven't checked it out yet (not that it's a necessary read- EJ works as a standalone- but it's likely a little more resonant if you've read the story). I can say that EXTINCTION JOURNALS is the strangest thing I've ever written, which is exciting.

EJ will be relased by the same mysterious press that's putting out another book of mine (which I also can't say anything about at this point in time). I swear that by the beginning of May all my jibber-jabber will make more sense. Sometimes contractual obligations keep me from reaching any level of lucid communication. What can you do?

On a final Powell's note, Ultra Marathon Man Dean Karnazes happened to be speaking the night I dropped the books off, and he's always highly entertaining, especially when you realize that he has magical powers and is basically the closest thing to a living super-hero you may ever meet. I mean, I've never met anyone else with a 38bpm pulse rate who is capable of running 350 miles non-stop. Have you? He plays it off very casually, but I can't help looking at him and thinking, "Man, this dude's like the endurance version of The Flash." It was good inspiration for the new batch of marathon training I've just kicked off (1/2 marathon in June, full marathon in October).

Maybe too inspiring. I headed out an ran myself into some sort of lame immune-suppressed state and came up with a brutal cold/fever/sinus infection. But once my tonsils are no longer so swollen they touch, I'm headed back out for speed drills.

Final note for now- the new Ghostface album is his best since Supreme Clientele. Not a point for argument, just a fact. Going to check out his live show tomorrow night.

JRJ
Posted by JRJ at 1:39 AM No comments:
Email ThisBlogThis!Share to TwitterShare to FacebookShare to Pinterest
Newer Posts Older Posts Home
Subscribe to: Posts (Atom)