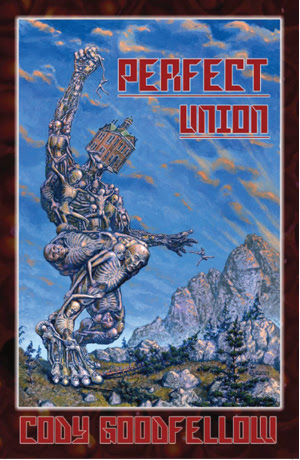 "PERFECT UNION is Cronenberg's THE FLY on a grand scale: human/insect gene-spliced body horror, where the human hive politics are as shocking as the gore. This book would make Marx and Thoreau's heads explode. In other words, astounding." --JOHN SKIPP, NY Times Bestselling author of The Long Last Call and The Bridge

"Look. It's very simple. If you're not reading Cody Goodfellow, then you're doing your brain a disservice. One of the best writers of our generation." --BRIAN KEENE, author of The Rising and Darkness on the Edge of Town

"Cody Goodfellow's imagination is a freeway flyer, and his prose is a ride on a rocket-sled. He's one of the two or three god-damned best writers in the Genres today." -MICHAEL SHEA, World Fantasy Award-winning author of Nifft the Lean and Copping Squid

THE FAMILY
When Drew married Laura, he also married into the Kowalski family. But on a trip with his twin brothers-in-law into the backwoods of northern California to find their abusive, estranged mother, buried secrets will be revealed, threatening his fragile marriage and his sanity.

THE COLONY
Mom has joined a new family: Leviathan-- a utopian colony that has taken the communist ideal to radical biological extremes, using the mutagenic honey from genetically tweaked bees to make ideal workers and flawless warriors. But the once-human hive is divided by a strike and brutal internecine war, and its tyrannical Chairman is eagerly recruiting scabs.

With the Kowalski twins taking opposing sides in the colony's bitter feud, Drew is forced into a world where nothing is taboo and survival is the only law, where he must negotiate between the insane collective mind and the savage refugees, even as the battling forces of the commune work to reshape him into a tool to complete their...

You wanted epic Bizarro? You wanted the old gooey, nasty, uncomfortable Cronenberg back? You wanted a fast-paced, bugged-out masterpiece?

Well, you've got it. I love this book. PERFECT UNION is amazing and it's on its way.