The Mars Volta and My Damnable Chatter 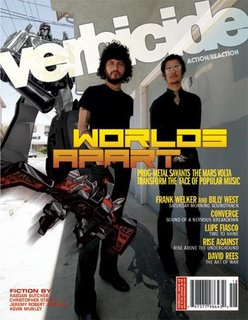 As of November 6th, 2006 the new issue of Verbicide (#18) is hitting the streets and let me tell you, this thing is a doozy.

I mean, if you held up an old doozy, circa '96, right next to this doozy, well, you'd be astonished.

"I can't believe I used to think that was a doozy," you'd say. And you'd feel shame. Rightfully so. Knowing your doozy is important.

Why does this one qualify as a Defcon 5 Doozer-mobile? Along with coverage of some very intriguing artists like Converge and Lupe Fiasco, the new issue happens to have an interview with Cedric of The Mars Volta. And the interviewer was... doozy incoming... me!

Obviously I'm very, very excited about this. The interview was great, touching on topics like surrealism, the writing process, the Volta's musical direction, Alejandro Jodorowsky, witch burning... it's a really weird interview. Having Cedric reveal he's been reading Angel Dust Apocalypse while on tour didn't hurt, either....

I'm sure my agent will be thrilled to learn that I've segued into music journalism while she awaits my next novel. I could offer the 15% of Nothing I got for doing the piece (this was strictly for the love- I volunteered) but I'm guessing she'll let me keep those revenues. Still, I had to take this opportunity. I've been writing my weird shit to the Volta's music for years now, with Amputechture being the newest incarnation of freak-out accompaniment.

Also included in the new issue of Verbicide is a revised version of my short story "Branded" which now features some smoother sentences and less errant tense shifts. Yes, it's still gross and kind of sad, but in a more "edited" fashion.

Anybody interested in the old Q & A/general repartee can drop by The Lost and The Damned message board tomorrow night (10/12/06). As long as your Java biz is current you should be able to click that link, type in a name, and head into the chat within a minute or so.

My chat is part of their Bizarro Week and will start at 7PM Pacific (8PM Mountain/9 Central/10 Eastern).

Please feel free, as always, to yell, "Blitkrieg!" or other exclamatory phrases whenever the mood strikes you. I don't know why, but that cracks me up.

Girl on Demand continued her frenzy of awesomeness last week, which included plugging my new books and keeping the world apprised of other shenanigans from Riot Lit compatriots.

She has refused my offer of marriage and a dowry. She has also refused my secondary offer to send her a box of assorted Hostess Snacks. Now that's integrity.

Instead of offering worthwhile, intelligent analysis of recently consumed media products, I offer the following:

The Departed- Scorcese continues to prove he's one of the finest film folks that ever breathe life into celluloid. So intense and entertaining I started grinding my teeth during the film and didn't notice until my jaw felt sore.

The Wu-Tang- Completely kicking ass out of nowhere. As evidence I offer Ghostface's Fishscale, GZA's Grandmasters, and Method Man's 4/21... The Day After. From production to lyrics to general Wu-ness, these guys are back and doing some of the best work of their careers. Makes me forgive the time Ghostface spent half a concert sitting on a speaker drinking orange juice while wearing a hotel bathrobe (which, actually, was strangely charming and apropos from such a generally idiosyncratic artist).

Adbusters- The new issue has some very strong fiction in it. They do that every once in a while.

I don't know Japanese, but am guessing this might be the right word: