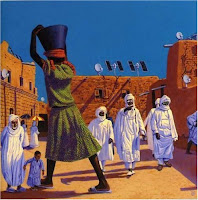 I’ve been getting some reader requests for access to the Bio/Write-up thing I did for The Mars Volta back in late 2007, for their album The Bedlam In Goliath.

When the band Bio changed to match their newest album Octahedron, the old Bedlam Bio was lost. I have placed a PDF version of it back on the Futurenet, at swallowdownpress.com.

As a “bonus” the PDF includes a (possibly un-used) t-shirt design which was based on my album-inspired symmetrina from the end of the write-up, as well as some semi-amusing composition notes from when I first started trying to decipher the album.

Just noticed today that the word “cryptomnesia” appears in the symmetrina from 2007. One of Omar’s solo albums released in 2009 (but recorded much earlier) bears that same word as its title. Could be unrelated, but either way it carries an irony given the meaning of the word.

By the way, that album (Cryptomnesia from El Grupo Nuevo de Omar Rodriguez-Lopez) is the craziest thing released from this crew in some time. They borrowed the drummer from Hella and he and Omar are just freaking out. With Cedric singing on most of the tracks it’s like an alternate Volta album for people who thought Octahedron was too sedate. By random comparison, Octahedron is to Faith No More as Cryptomnesia is to Mr. Bungle.